To make a donation in honor of Joy, DONATE HERE!

With a natural ability to envision, communicate and execute creative ideas, Joy Lynskey is a well-recognized talent in the world of interior design.  She is the Founder and Creative Director of Jewel Toned Interiors (JTI), an award-winning interior design studio located in Fort Lauderdale.

Her team is dedicated to creating spaces that invigorate, inspire, and emotionally resonate with their audience. Joy’s passion for design and community has led her to the development of a two-prong-focused business: interior design and social responsibility.

The JTI Team participates and fundraises annually for Habitat for Humanity and the Salvation Army.  They recently completed their first bedroom makeover for a Make-A-Wish recipient and work with an extensive list of clients to provide beautifully designed residential buildings for low-income families.

Cindy Bizier fretted incessantly about her grandson’s care, worried the boy would chase his yellow dump truck into the street or wander too close to the canal while his mother, Autumn, who struggled with drugs, wasn’t watching.

So the anguished grandmother did something extraordinary: She called child welfare authorities on her own daughter. More than once.

And when a child-abuse investigator visited the Sunrise home where the three generations lived, Bizier stepped outside and quietly pleaded with him to take Aidan into foster care.

It was the only way, she believed, to protect the boy she lovingly called Charlie Brown. 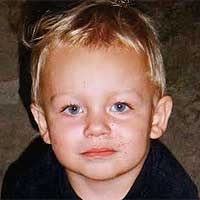 On the morning of March 13, 2009, Cindy Bizier received a panicked phone call from Autumn. The grandmother rushed home. As she got closer, she saw a helicopter hovering overhead. She knew.

The flames left an eerie, heart-shaped scorch mark on the wall of the garage, precisely where Aidan was found, alone except for Missy, the faithful pet who died beside him.

Haunted by the loss of her grandson, Cindy Bizier couldn’t bring herself to paint it over. 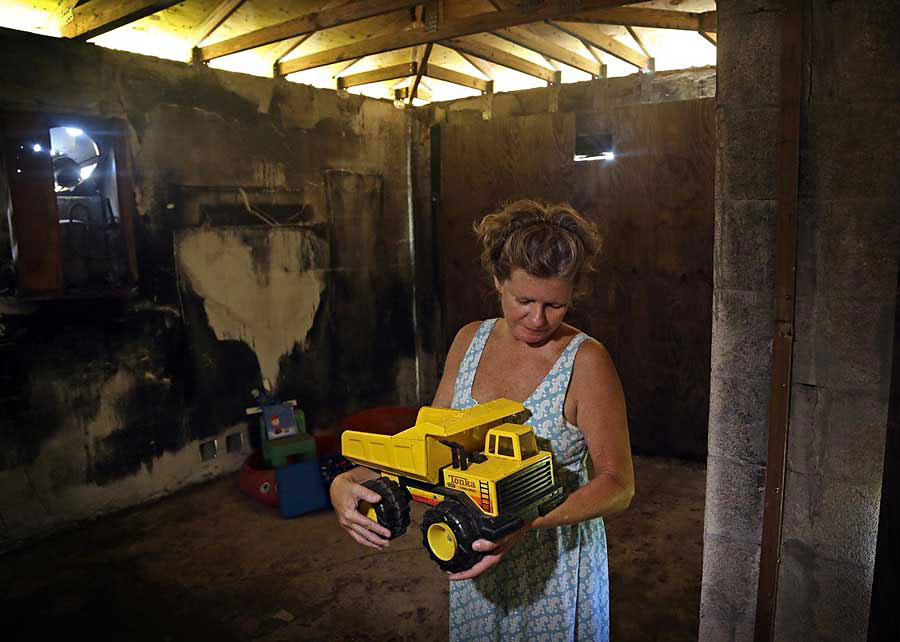 After ten years of never losing hope, Cindy now has a group of people willing to see the project through to completion. We need your help to make it a reality.

In the picture,  Cindy Bizier holds one of her grandson Aidan’s favorite toys. It is part of a small collection of keepsakes she has in his memory. He died in her house when fire erupted while she was at work and his mother was sleeping. Aidan was found next to the heart-shaped scorch mark in the background.

The next step is to begin the repairs to restore her home, and her heart.

Our goal is to completely repair her home and move her back into a ‘new’ home.

We are on our way, but we need your help.

Traci Miller, Senior Vice President and Shareholder of Miller Construction, has committed her company to take on the project as lead contractor. They have committed 100% of their time and efforts as a gift to Cindy and investment in Rebuilding Together. Permits are being drawn up and work will begin soon.

We Now Need YOUR Help

If you, your group or company, can be a part of making this dream a reality for Cindy, please consider becoming a partner and making a gift or committing in-kind work on the project.

*Our collective goal of $100,000 reflects both cash sponsorships/donations, as well as in-kind work from local partner companies that will be doing the work.

A special thank you to the many partners that have begun the journey with us to Rebuild Cindy’s home.

Make an impact in your community today!

Rebuilding Together Broward County works to bring volunteers and communities together to improve the lives of low-income homeowners and neighborhoods in need. However, we can only achieve this goal by partnering with key stakeholders to make a collective impact. Whether you are a corporation that wants to make an difference, a nonprofit/church that wants to partner or a volunteer that would like to invest knowledge and skills to impact the lives of low income homeowners; we are the avenue to help you bring about real change. Make a difference Today!

My name is Cindy Presgraves and I live in Atlanta, Georgia.
I am Certified Luxury Home Marketing Specialist, a member of the Million Dollar Club.
I have been a Realtor for 3 years. I became a top-producing Realtor while going through a divorce as a single parent.
I began in Atlanta, without knowing anyone and a new career.
The reason why I became an agent is because I love helping people in many ways and building a lifetime relationship while finding their dream home.
Mostly it’s because I can be my own boss and have flexibility for my family.
I am on Agent on Fire to show people anyone can succeed as a single parent or a realtor if they have the right mindset no matter where or how they are in life.

My name is Tiffany Novitsky and I live in the Greater Tampa Bay Area of Florida.
I have been a Real Estate Agent for 3 years now with 2 years prior experience in Real Estate as an Unlicensed Assistant where I was able to learn the ropes.
I became a Real Estate Agent because I believe that to service others insuch a close-to-home capacity is in my nature.
I am passionate about creating the best experience for my friends/clients in one of, if not, the biggest purchase of their lifetime and what will often be a pivotal point in their financial stability.
I am a part of Agents On Fire to show others that they are capable of achieving the highest goals they set if they apply hard work and dedication.

Hello, I am Stephanie Simmons. I live on the Mighty Mississippi. I have five children and three beautiful grandchildren.
I currently hold my real estate license in both Iowa and Illinois and I am also working on my third license as I want to relocate next year.
I became a real estate agent as it is something I had wanted to do for many years and unfortunately was directed in other directions on all spectrums for quite some time and was told by many I could not do it.
I am involved in real estate because a house is a place to build traditions, memories, a place to laugh and cry but, most importantly, at the end of the day to have a place to call home.
I want to help others have that dream. Every day is a new day and every day you learn something new whether it be about people. or the process involved with home-ownership and that is why I do what I do.

My name is Lisa Church and I live and grew up in Portland, Maine.
I have been involved in supporting residential, commercial and investment real estate dreams in the communities of Maine and New Hampshire for the past five years.
Founded by my mother’s involvement and encouragement of owning/investing in real estate, and utilizing my background in Corporate and Technology, I took a career leap to follow my purpose and passion for negotiating and becoming the voice for others.
I am on Agent On Fire to show people that having a tenacious attitude and putting your mind to something is the winning recipe for success.

My name is Kevin Welch. I live in Moline, Illinois.
I have been a real estate agent for a little over a year now.
I have been investing in real estate since 2004 and have purchased over 100 homes of my own.
The reason I became a real estate agent is because I wanted to fulfill the dynamic of helping others buy their own home or assist them into actually becoming real estate investors themselves.
Just seeing the excitement and joy on someone’s face when they are being handed the keys to their new home always seems to fulfill me with a such a great sense of achievement that I decided to join the Agents On Fire Show to help prove to the world that anyone can achieve their goals and that dreams really can come true.

My name is Harley Dufek and I live in Fairfax, VA near Washington DC.
I have been in Real Estate since 2005.
The reason why I became an agent is because I love helping others achieve their goals in the real estate space and I love working for myself and having unlimited income potential.
I am on Agent on Fire to show people that every one of us can achieve whatever dreams we have with the right mind set and dedication.

My name is Angela Dowd and I live in Windham, New Hampshire.
I’m a licensed realtor for Keller Williams in both Massachusetts and New Hampshire.
I became an agent 7 years ago when I decided to sell my own house and wanted to avoid paying realtor fees.
I love working with my clients and helping make their dreams a reality!
The reason I am on Agents on Fire is to accelerate my professional growth and become the Premier Agent in my market, all while creating a work / life balance to spend more time with my beautiful family.

My name is Anton Morrow and I live in Fort Lauderdale, Florida.
I have been a real estate agent for a little over a year now.
The reason why I became an agent is because I love talking to people and I love helping them upgrade to the life they deserve.
I am on Agents on Fire to show people that anything is possible if you work hard and have the right mindset.

My name is Austin Bergman I live in Fort Lauderdale Florida, I have been in real estate for 19 years now, it’s really the only thing I have done.
I started one of Richmond Virginia’s most successful brokerages selling just about 500 homes a year at a 350,000 sales price.
When I got the opportunity to reset my life in 2017 I moved south.
Now I focus on high net worth waterfront properties. It’s a whole different ball game.
I am on Agents On Fire to show the world you can lose it all and with the right mindset and drive you can have it all over again.